Nina Mya is a rewarded Finnish jazz singer, composer and vocal teacher. She has published three albums as a band leader: Flying Solo (2012), Our Time (2014) and Closure (2016), which was also published and praised in Germany. She has performed all around the world in big arenas, festivals and clubs. Besides of her own band she has performed and recorded also as a featuring artist with many big names in the music industry, such as Frank McComb, Tia Fuller, Iiro Rantala and Jukkis Uotila. Mya has a dark, technically impressive voice and she is a soulful and strong interpreter who combines jazz, soul and gospel influences in a unique way.

“Nina Mya is a highly talented Finnish jazz singer, who already attracted the attention with unusually mature sense of style, sound and natural skills for improvising at the age of 18. Within a few years, she has elevated as a singer and as a performer already fully to an international level”, -Jari Perkiömäki, Saxophonist/Educator/Doctor of Jazz Music

“Nina Mya has grasped an understanding of the expressive tradition of jazz music in a way that one seldom hears in the Nordic countries. Her command of her voice and sonic flexibility is impeccable and she’s easily able to adapt to a multitude of situations and styles. She is also a fine composer and a band leader. Nina is a diligent worker, her energetic output is getting stronger by the day and I think any musical situation can benefit from her presence.” -Jukkis Uotila, Drummer/Pianist/Educator/Professor and leader of Sibelius Academy Dept. of Jazz

“Jazz singer Nina Mya’s international name might even fool someone with her origin: her voice, sound, style and technique reminds of a confident professional with a much longer career path”, -Helsingin Sanomat

“Flying Solo is a hell of a debut from vocalist Nina Mya – only her first-ever time on record, but a set that already glows with a brilliance many older jazz singers will never reach! Nina’s not only got this soulful style that graces each little twist and turn of her musical phrasing – but she’s also a hell of a writer, and comes up with a really fresh batch of tunes for the set – music that reminds us that there’s still plenty of richness left in the jazz vocal form, as long as you know where to look!”, Dusty Groove, US

”Nina Mya has risen to the top of Finnish jazz scene, not only as a singer but also as a dramatic live performer. She has some unexplainable initial force and soulfulness that not many singers have. With this dark sounding album, the band will not go where the fence is the lowest because the album moves in some spheres that require true professionalism and courage. With honesty and all her knowledge and power Nina Mya succeeds perfectly with Closure” -Jazzrytmit 08/2016

”Closure, a great combination of jazz and gospel, is by far the best and fullest album of Nina Mya. The swinging quintet interprets the music surely and vividly, and Mya herself is convincing with her intense and dark style.” -valonkuvia.fi Blog 07/2016

”The album Closure verifies that the singer, composer and teacher, Nina Mya, masters her field of music with exceptional sovereignty. It sounds like all the musicians give their all to the soulful landscape of the album in a very intuitive level. You can not only hear but also really feel the music.”-Turun Sanomat 07/2016

”Jazz vocalist Nina Mya has done the best album of her career so far. The new material of the album Closure is timeless – often times vocal jazz sounds somewhat old and retro but not in this case. Good album – done professionally and with a lot of feeling – that sounds even better live.” -Jazzpossu 07/2016 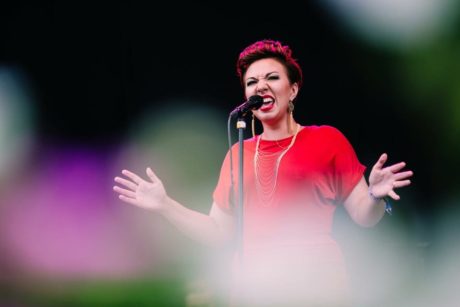